The SynthHD is a state of the art Dual Channel RF Signal Generator.  These devices have set the bar on microwave radio frequency generators for quality, size and price.  As always, our products are designed and manufactured in the USA!

Tune any frequency between 10MHz and 15GHz in 0.1Hz resolution.  Adjust calibrated amplitude in 0.1dB resolution up to +20dBm and across more than 50dB of range.  Each channel has an independent frequency and amplitude settings, or set both channels to the same frequency and adjust phase between the two in 0.1 degree increments.

The SynthHD is a 10 MHz to 15 GHz dual channel software tunable RF signal generator and frequency sweeper controlled and powered by a device running Windows or Android via its USB port. The SynthHD ’s dual independent channels can be configured to run as two different frequencies, or the same frequency with different phases. This allows its use in antenna beam steering applications or quadrature signal generation commonly used in image reject frequency conversion.
The SynthHD also has nonvolatile onboard flash memory so it can be programmed to fire up by itself on any frequency, power, sweep or modulation setting (and combinations thereof) to run without a PC in the field. This makes for a highly mobile, low power, and lightweight solution for your RF signal generation needs. 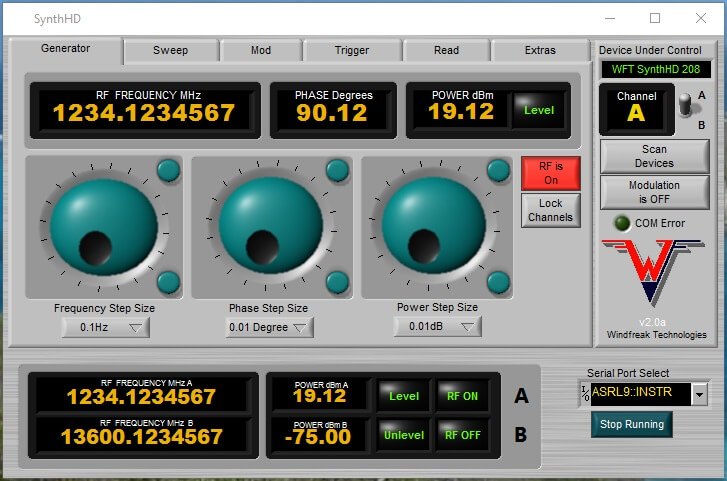 The following video shows the SynthHD doing a Pulsed FM Radar Chirp (FMCW) that is simultaneously AM modulated.

The video below is taken with both channels driven into a mixer. The mixer is then fed into an oscilloscope and displayed on the right side of the video. The signal shows the DC and near DC downconverted component. The DC level depends on the phase relationship between the two channels. The switch on the far right of the GUI toggles between controlling channels (RFA or RFB). For orders over 10 units discounts will apply. Request a quote here. Emails will be answered within 24 hours. Keep an eye on your SPAM folder. You will be given a lead time and a quote if you desire large volume.

The typical output power (per channel) of the SynthHD is shown below. This graph is of raw unleveled operation at both the maximum and minimum gain settings of the output variable gain section. Gain is set via dBm power commands allowing output power levels anywhere in the range between the minimum and maximum levels shown below. RF port power and frequency can be set independent of each other. Power levels are settable in 0.01dBm increments. On board calibration is attained through a look up table for each channel. Device calibration is performed at the factory and stored in onboard flash memory. Calibration is good from 10MHz to 20GHz. Operation from 20GHz to 15GHz is uncalibrated and unspecified. All parts of the signal chain have high quality voltage regulation, and the D/A’s driving the VGAs have a 1% voltage reference controlling their outputs. The typical SynthHD harmonic distortion is shown below for the second and third harmonics. This data is taken at a leveled fundamental power of 0dBm.
If lower harmonic levels are needed, Windfreak Technologies suggest the use of low cost SMA filters from Crystek and Minicircuits.

Note: The plot above shows the conducted port at 5.0 GHz. The terminated port is set at 5.001 GHz. The spur location is at a 2MHz offset since the SynthHD uses an RF divide by 2 circuit to achieve 5GHz. As the RF frequency decreases, the isolation spurs move out, until they are eventually outside of the loop bandwidth and thus significantly attenuated.

Example if using the SynthHD 27MHz internal reference: For the fundamental VCO range of 3400MHz to 6800MHz the first integer boundary happens at 27MHz X 126 = 3402MHz, the next at 27MHz X 127 = 3429MHz and every 27MHz thereafter up to 6777MHz. Above and below the fundamental VCO band the spacing will be affected by the RF doubler or RF divider respectively. If the desired VCO operating frequency is 3402.01MHz this would give spurs 10KHz on either side of the carrier that may be unacceptable. In this case, using the 10MHz reference would be suggested since its closest integer boundary is at 3400MHz. Spurs 2MHz away will be attenuated to satisfactory levels by the loop filter.

It’s possible to lock both channels in both frequency and amplitude for easy tuning during IMD testing of IP3 in passive and active components. The plot below shows two tones combined with a YL-70 0.5-2.0 GHz KL combiner that has roughly 20dB of isolation between ports. The tones are centered at 1GHz and separated by 1MHz. This method will allow for IP3 testing below roughly +40dBm.

The SynthHD has an algorithm to reduce amplitude drift over temperature. The user can specify 4 different control settings in the firmware.